When you ask local manufacturers to describe 2020, the words that keep popping up are things like unexpected, rollercoaster and whirlwind. For the food & beverage sector, one more word could be added to the list: expanding.

Despite the challenges of this year, several local manufacturers of food and drink have taken the plunge with plans to expand current facilities or move growing companies into new locations. Some pivoted their businesses to produce other items needed because of COVID-19. Still others found themselves scrambling to meet exploding demand. 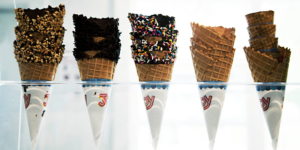 At Joy Cone, work started last week on an expansion of the facility’s batter room. The extra 1900-square-feet of space will allow for more production of the company’s ice cream cones and has the potential of adding more jobs to the company’s roster.

Drinking Horn Meadery, which has been manufacturing the honey based wine out on North Grant Street since 2017, opened a Mead Hall in Historic Downtown this summer. Designed to resemble a Viking drinking hall, the company hosts tastings, Viking Games and Sunday brunches at the new location.

Another local producer of potent potables shifted gears during the pandemic. Canyon Diablo Spirits and Distillery pivoted from making small-batch artisan liquors like prickly pear vodka and mesquite smoked whiskey to creating hand sanitizer for local hospitals. This spring they also expanded into the building next to their facility on North Grant Street, said co-owner Joe Pendergast, and plan on adding new products to their menu of spirits in the near future.

And let’s not forget that pets need their food just like their human companions. Purina PetCare saw a run on its products during the first few months of the pandemic and, according to Flagstaff Plant Manager Larry Holmes, it was a challenge keeping up with demand. The company has also been working hard to donate needed pet food to areas particularly hard hit by COVID-19 and provided two truckloads of pet food recently to the Navajo Nation.

During manufacturing month, we are celebrating the diversity of manufacturers in Flagstaff. It is exciting to see our food and beverage makers not only surviving but thriving during this time.