It is the end of one era – and the beginning of a new one.

Chris Bavasi, who was instrumental in the formation of the Economic Collaborative of Northern Arizona and served as the Chairman of its Executive Board since it began in 2010, stepped down from this post earlier this month. He will remain on the board, however, as a lifetime emeritus member.

Chris has a storied history in the Flagstaff community. An NAU graduate, he’s a former Flagstaff police detective, member of the City Council and six-term Mayor. He also served in the Flagstaff Unified School District Governing Board, including as its president. For many years, he’s been the Executive Director of the Office of Navajo and Hopi Indian Relocation (ONHIR), a federal agency.

The breadth of that experience made Chris the perfect person to lead an effort 12 years ago to create ECoNA, with the goal of encouraging 16 entities working in the economic development sphere to align their efforts. 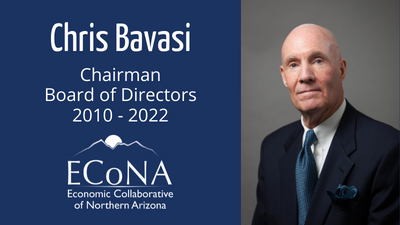 Rich Bowen, who served as ECoNA’s first President/CEO, said that Chris was uniquely positioned to convince these public, private and nonprofit institutions that working together would not take away from their individual economic development efforts, but instead maximize the results.

“The key was to have everyone rowing together rather than working in silos,” he said. “Whenever any conflict or challenge came along in the early days, Chris was outstanding in helping resolve those issues and kept the collaborative moving forward.”

Chris was also a strong promoter of a regional approach, understanding that the success of communities like Winslow, Page, Sedona and Camp Verde was good for Flagstaff’s economy. Or as John Stigmon, who succeeded Rich Bowen as head of ECoNA, said to me: “He was the best cheerleader for the region.”

Although I know that Chris would shy away from taking credit, he has influenced nearly every major project in our region in the past dozen years and been a key part in fostering northern Arizona’s economic vitality.

Joshua has more than 16 years of experience in building relationships between higher education institutions, government and the community. Prior to joining NAU in early 2020, he served as assistant director of Government and External Affairs at California State Polytechnic University in Pomona. There he managed legislative and budget advocacy with state elected officials and led outreach and engagement efforts with the university’s partners, including local and regional chambers of commerce.

His experience also includes working with the Mayor of Riverside to leverage the value of that city’s four institutions of higher learning on issues related to economic and workforce development.

At NAU, he works closely with the office of President José Luis Cruz Rivera and across university departments to enhance the university’s reputation and engagement locally and regionally. In addition to being part of the ECoNA’s Executive Board, Joshua also serves on the boards of the Greater Flagstaff Chamber of Commerce and United Way of Northern Arizona.

We are grateful to both Chris and Joshua for their leadership as we continue our collaborative work to keep our region’s economy thriving.