October is National Manufacturing Month, a time when we celebrate a sector that, according to McKinsey & Company, generates $2.3 trillion of the U.S. gross domestic product, employs 12 million people, and accounts for 70% of R&D investment.

But those outsized statistics are mostly fueled by small companies; the Small Business Administration estimates that three out of every four manufacturers in the U.S. have 20 employees or less.

Companies like Chocolita, maker of botanical, organic chocolates, which recently moved from a cooperative kitchen in Sedona to open a combined manufacturing/retail outlet in Kachina Square in Flagstaff.

Founder Sarah Ann Lesslie started out as massage therapist with a strong interest in herbal medicine. She said her fascination with chocolate began when she attended a workshop that ended with a cacao ceremony, the ritual of drinking chocolate that dates back to ancient Mayan and Aztec civilizations. These ceremonies are popular in health and wellness circles because the chemicals in chocolate are natural anti-depressants, increasing serotonin levels and blood flow to the heart.

“I remember thinking, I want to do more of this, I want to share this with people,” Sarah said. Soon she was apprenticing with noted Chocolatier Kelly Johnson in Sedona, mastering the art of creating chocolate bars and truffles.

Then one day Sarah combined Moontime herbs, known for their relaxing and pain-reducing qualities, with her chocolate, and a new product was born. 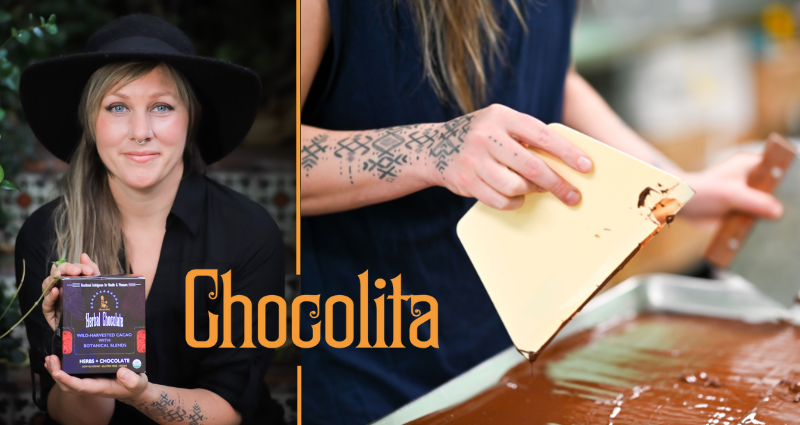 It’s taken time to build up her company. When she started in 2014, she was still working as a massage therapist during the day, then crafting her chocolates at night and on the weekends to sell on Etsy.

Ultimately, the startup won the Verde Valley Moonshot Pitch Competition and she began working with a co-packer in Santa Cruz, California, to scale her business. The upside was she was now distributing to chains like Natural Grocers and Whole Foods. The downside was that working with a co-packer meant she had to order 5,000 units of each product at a time and shipping costs were eating into her bottom line. Plus, she was running out space to store her product at the cooperative kitchen.

“The boxes were almost up to the ceiling,” she remembered. It was time to bring her manufacturing back in-house and open her own place.

The 660-square-foot facility on Steves Blvd., which opened in March, allows her to diversify her business. While most of her revenue still comes from her wholesale business, the retail side is growing. She expects she’ll be adding a dedicated retail manager in the near future, which will bring her staff up to three. She speaks highly of Flagstaff’s workforce, saying that people who have joined her team have been impressive and inspired.

We are happy that Chocolita has found a place in northern Arizona to expand the manufacturing portion of the business. We know Sarah’s time in Flagstaff will continue to be sweet and look forward to sampling her chocolate bars, truffles, sipping chocolates and more. You can check out her products online at chocolita.com.