Becoming a homeowner in Flagstaff has never been easy, but this year the barriers have been particularly high, with the median average price of a single-family home well above $700,000 by this summer.

Combine that with hikes in mortgage rates and overall inflation pressures, and it was a triple whammy that dashed the dream of homeownership for many who live and work in northern Arizona.

Public, nonprofit, and private entities are working together to give some relief by producing starter homes through Habitat for Humanity of Northern Arizona (HFHNA) that are small-scale, affordable, and meant to create equity quickly for homeowners.

The group is currently building the first of these homes in Flagstaff’s South Side, but it is likely the effort will grow exponentially in the next five years under a plan to build at least 40 of the units at the new Timber Sky development on West Route 66.

“The escalation of home prices has closed the window for a huge amount of middle-class people,” said Eric Wolverton, Executive Director of HFHNA. “This isn’t about serving the poorest of the poor. We are looking to create workforce housing.” 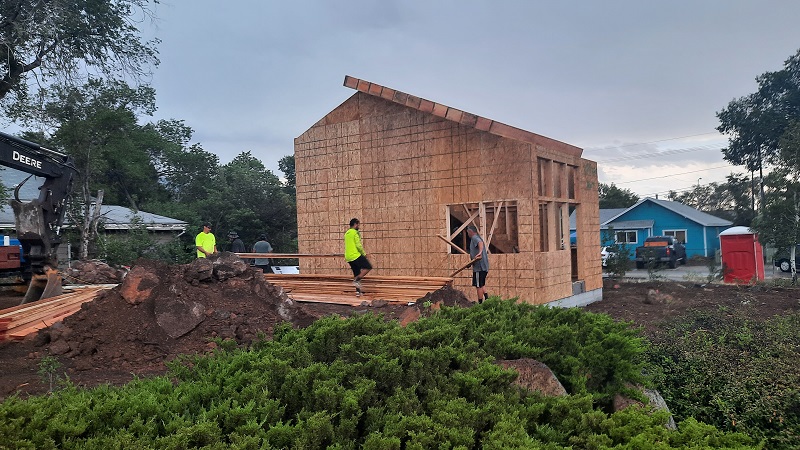 Wespac Construction is busy completing the first prototype home at the corner of Butler Avenue and O’Leary Street. The land was donated by the City of Flagstaff and the designs were contributed by former Flagstaff City Architect Karl Eberhard.

Under the starter home plan, a qualified buyer purchases the 400-square-foot home, which can house up to three people, from HFHNA for $1,000 down and a monthly mortgage of $833. One of the qualifications for the home is that the rent does not constitute more than 30% of the homeowner’s income.

The rent paid by the homeowner is put into an account. The homeowner has to stay in the home for a minimum of three years. When they leave, homeowners sell the property back to HFHNA and receive the rent that has been collected. Therefore, someone who leaves a starter home after five years walks away with the $50,000 in equity built during that time, and there are no restrictions on how those funds are used.

“That’s their money; they don’t have to buy a new house,” said Wolverton. “They could or they could decide to start a small business with the money. It’s up to them.” 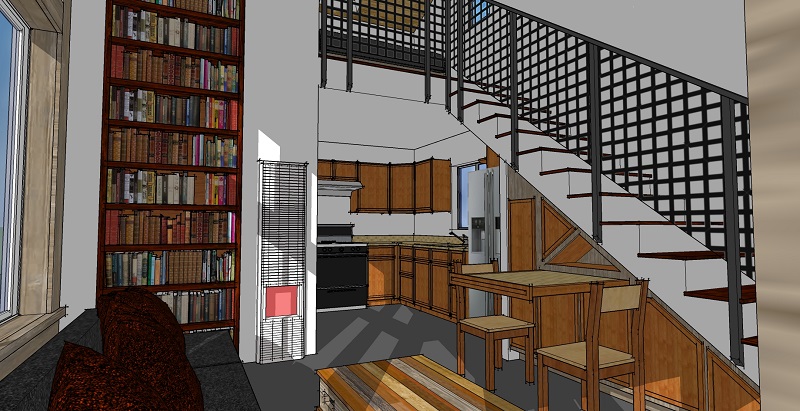 Homeowners can stay in the starter home for a maximum of 10 years, after which they must sell the home back to HFHNA for $100,000, Wolverton said.

The impetus to create the small homes came when HFHNA was priced out of building the one to two conventional homes HFHNA typically built each year. Even with “sweat equity” from the homeowner, volunteer workers, and rock-bottom prices from vendors, the cost of those homes was about $260,000, By comparison, the starter homes will cost about $100,000, not only because they are smaller but because HFHNA and Wespac can build them at scale.

In the next five years, HFHNA hopes to build at least 40 units on a three-acre section of the new Timber Sky development on West Route 66 between Flagstaff Ranch Road and Woody Mountain Road.

“It’s a game-changer for this town,” said Tyler Mark, Vice President/Principal at Wespac. “It’s going to have a lot of impact and it could be a nationwide model.”

In fact, Wolverton has discussed the starter home plan with the national leaders of Habitat for Humanity and hopes that it can be replicated. It also doesn’t have to be limited to city land trusts or private developers donating land, he added; school districts with property who want to retain or attract new teachers also might benefit from a starter home initiative.

Wespac – and most of the other private entities involved in the starter home project – have been eager to help get this initiative off the ground as part of their efforts to be good corporate citizens, Mark said. Wespac has been a supporter of Habitat for Humanity for more than a decade, with its charitable foundation, M3F, donating $260,000 over the past five years.

“We’re a part of this community and it’s important to give back,” he said. “I believe in the Habitat mission. It’s never been cheap to live in Flagstaff. Anything we can do to create stepping stones to homeownership, we want to do.”

We are optimistic that the starter home program will help make a dent in the scarcity of affordable workforce homes, and help employees who otherwise would be squeezed out of the marketplace.