The recent ECoNA Advisory Council meeting was proof positive that many of our community’s efforts to make our environment cleaner and safer also serve the needs of our local economy.

The Council heard from representatives of the Northern Arizona Intergovernmental Transportation Authority (NAIPTA), which operates the Mountain Line bus system; the regional MetroPlan organization and a professor with the Ecology Restoration Institute (ERI), an independent research branch of Northern Arizona University.

Voters have always been supportive of NAIPTA and its environmental goals. Back in 2008, NAIPTA received voter approval to begin transitioning from diesel to hybrid buses and now the entire fleet of 29 fixed route buses are hybrid. In 2016, voters renewed extending the transit tax that helps support NAIPTA with an impressive 71% voting in favor of the measure. 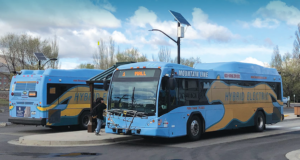 Now, according to NAIPTA CEO and General Manager Heather Dalmolin, the authority is on the road to zero-emissions. The NAIPTA Board has adopted a plan outlining the steps to move to an electric fleet, and NAIPTA has received federal funding for the purchase of two zero-emission vehicles.

“These first two buses will serve as a pilot program to determine if a move to 100% electric is feasible from a financial and reliability standpoint,” she said.

MetroPlan is responsible for ensuring that transportation projects like roads and bridges, trails, bike lanes and bus routes are thoughtfully planned and coordinated in ways that meet the needs of the community. To learn more about MetroPlan and its work, check out this short, recently released video. 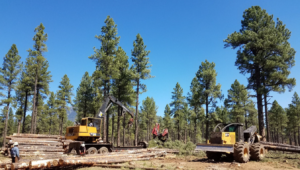 Moving from transportation to trees, our third presenter at the Advisory Council Meeting talked about efforts to establish a Forest Training Operations Center, key to efforts to thin and restore our forests and reduce the instances of wildfires in our region.

Han-Sup Han, Director of Forest Operations and Biomass Utilization at ERI, said the main challenge for contractors working to thin forests in Arizona, Colorado and New Mexico is a lack of skilled workers. Contractors often do in-house training because external options are rarely available.

The Four Forest Restoration Initiative (4FRI) has a goal of treating 50,000 acres of forests each year. In 2017, 4FRI was only able to treat just 12,450 acres with its crew of about 222 full-time equivalent position. Han noted that indicates contractors would need closer to 800 to 1,000 FTEs to meet the annual goals.

The solution would be a Forest Operations Training Center, ideally at Camp Navajo, that would focus on teaching people to be forest machine operators, truck drivers, and repair and maintenance professionals.

A two-year $350,000 federal grant was secured last year to create plans for a center, including writing a curriculum. The next step is a grant proposal that will likely be submitted next month to the federal Economic Development Administration to fund the center for three years.

If it is successful, the center would start offering programming next year. Han said organizers have some communities in mind for recruiting, such as displaced coal mining workers, retired or returning veterans, Native Americans and high schoolers looking for an alternative to traditional post-secondary education.

From the next generation of buses, to a program that would accelerate repairing our forests, to understanding that transportation systems must include pedestrians and bicyclists, our region is perfecting that balance that allows both the environment and our local economy to thrive.