Discover Flagstaff, formerly the city’s Convention & Visitor Bureau, has always known how to leverage Northern Arizona’s assets to draw tourists – and their dollars – to our region.

From skiing and snowplay in winter to food, beer and music festivals in the summer to the Grand Canyon and historic Route 66 year round, the department is tireless in its efforts to make Flagstaff a destination for all seasons.

This is hugely important for a region where tourism is one of the main economic engines. But it also benefits all residents, as the BBB taxes collected from visitors help fund park maintenance, public art, open spaces, and science education in our schools.

This year, Discover Flagstaff is getting some out-of-the-world assistance in promoting the city with the 50th anniversary of the Apollo Lunar Landing. 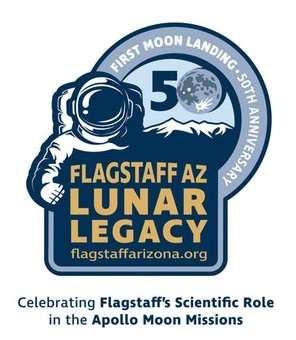 Flagstaff played a big role in making the Apollo astronauts’ walks on the moon possible. Lowell Observatory, the U.S. Naval Observatory, Meteor Crater, Sunset Crater, Cinder Lake and the U.S. Geological Service all played a part, performing scientific research, mapping the moon’s surface, and providing places where astronauts could test their skills and instruments before blasting off into space. Astronauts Armstrong, Borman and Stafford used the telescopes at Northern Arizona University for their personal moon mapping.

There are numerous events between now and July 20 that further explore our region’s role as the half century anniversary approaches, including:

Our congratulations to all of the partners making Flagstaff’s Lunar Legacy programs and events possible and to Discover Flagstaff for promoting our role in space exploration to the rest of the world.