Among the many changes that came out of the era of Covid-19 was the dramatic growth of one of the pillars of our local biosciences sector, the TGen Pathogen and Microbiome Division, better known as TGen North.

TGen North was on the front lines very early on in the crisis, using genomics to analyze the structure of the coronavirus and develop one of the first tests to detect it. The pandemic also prompted the nonprofit to build its own CLIA-certified diagnostics lab. (CLIA, which stands for Clinical Lab Improvement Amendments, is the federal certification needed before a lab can accept human samples for diagnostic testing.)

“That allowed us to test patient samples and return the results to patients and clinicians, which we hadn’t done before,” said Dave Engelthaler, PhD, the director of TGen North. “It had been a long-term goal for us to develop a diagnostics lab, but there’s nothing like an emergency to put things into place.” 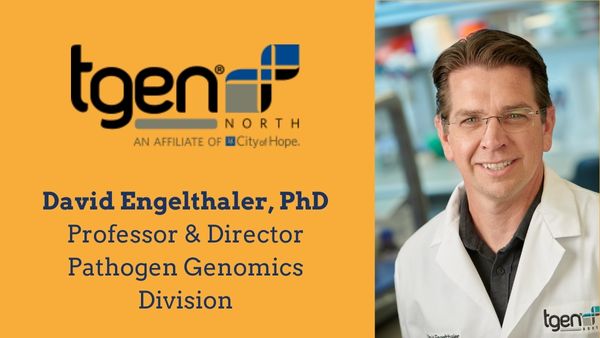 The size of TGen North staff doubled to 70 as it became a “genomic first responder” and diagnostic lab, and it expanded its facility on W. Shamrell Blvd. in Flagstaff by about 3,600 square feet to accommodate the additional work it was doing.

As Covid-19 moves from pandemic to endemic, the lab means TGen North can test for a wide variety of infectious diseases and combine its genomics and diagnostic capabilities to help health officials respond to a crisis more quickly.

Before, TGen was brought in after an outbreak had already occurred to investigate and provide analysis on how and where it started. Now it can test and analyze in real time to identify the first few cases that might signal a future outbreak.

“Take a pathogen like Group A Strep [the cause of “flesh-eating” disease],” said Engelthaler. “We have been sequencing every strain of that in Arizona, and when we find two cases with the exact same genome, we know we have identified an outbreak as it’s just starting.”

TGen North is also continuing its “one health” work to look at pathogens not only in humans, but in animals and in the pathogens’ natural environment – or microbiome.

It has been part of a large, multi-year study with the Arizona Department of Health and U.S. Department of Homeland Security to help develop an “early warning system” to reduce the risk of developing Valley Fever.

About two-thirds of Valley Fever cases occur in Arizona and 80% of those are in Maricopa County and scientists know the disease is contracted by breathing in the spores of the fungus.

The study involved putting air filters in areas and testing them on a regular basis to determine the presence of the fungus. Now modeling is being applied to see how things like climate variables impacted the amount of fungus in the air.

With that knowledge, scientists will be able to let the public know when are where they would be at high risk of exposure, Engelthaler said.

TGen North has taken the abilities it gained as a “genomic first responder” during the Covid crisis and is now leveraging that to protect populations from other infectious diseases. We applaud their work and look forward to the new innovations TGen North develops to advance clinical medicine and public health.